Here is a peek inside my studio at my most recent artwork. 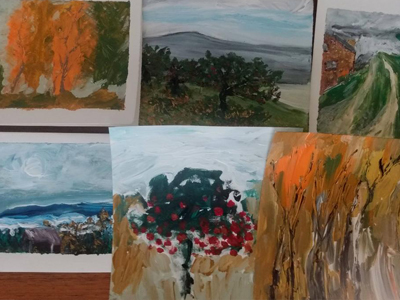 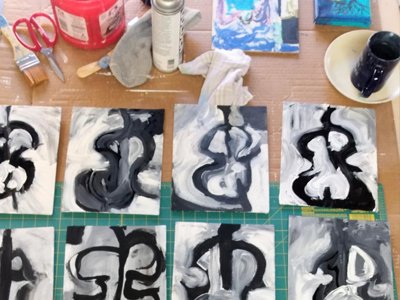 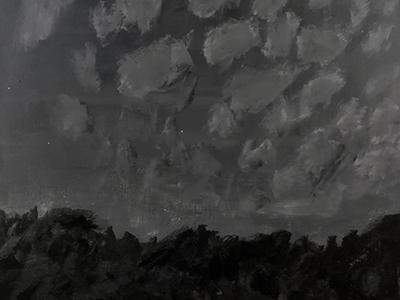 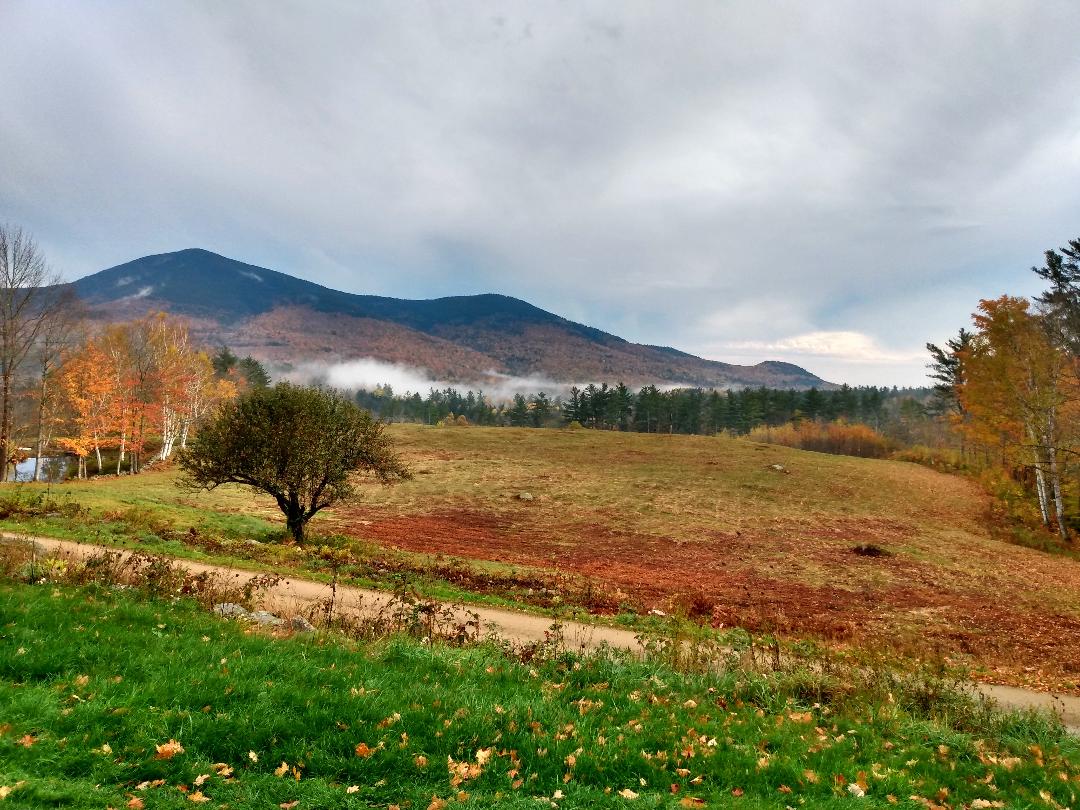 I was in New England recently. I arrived just after the peak of fall colors, which was not at all disappointing, as it was still breathtakingly beautiful. 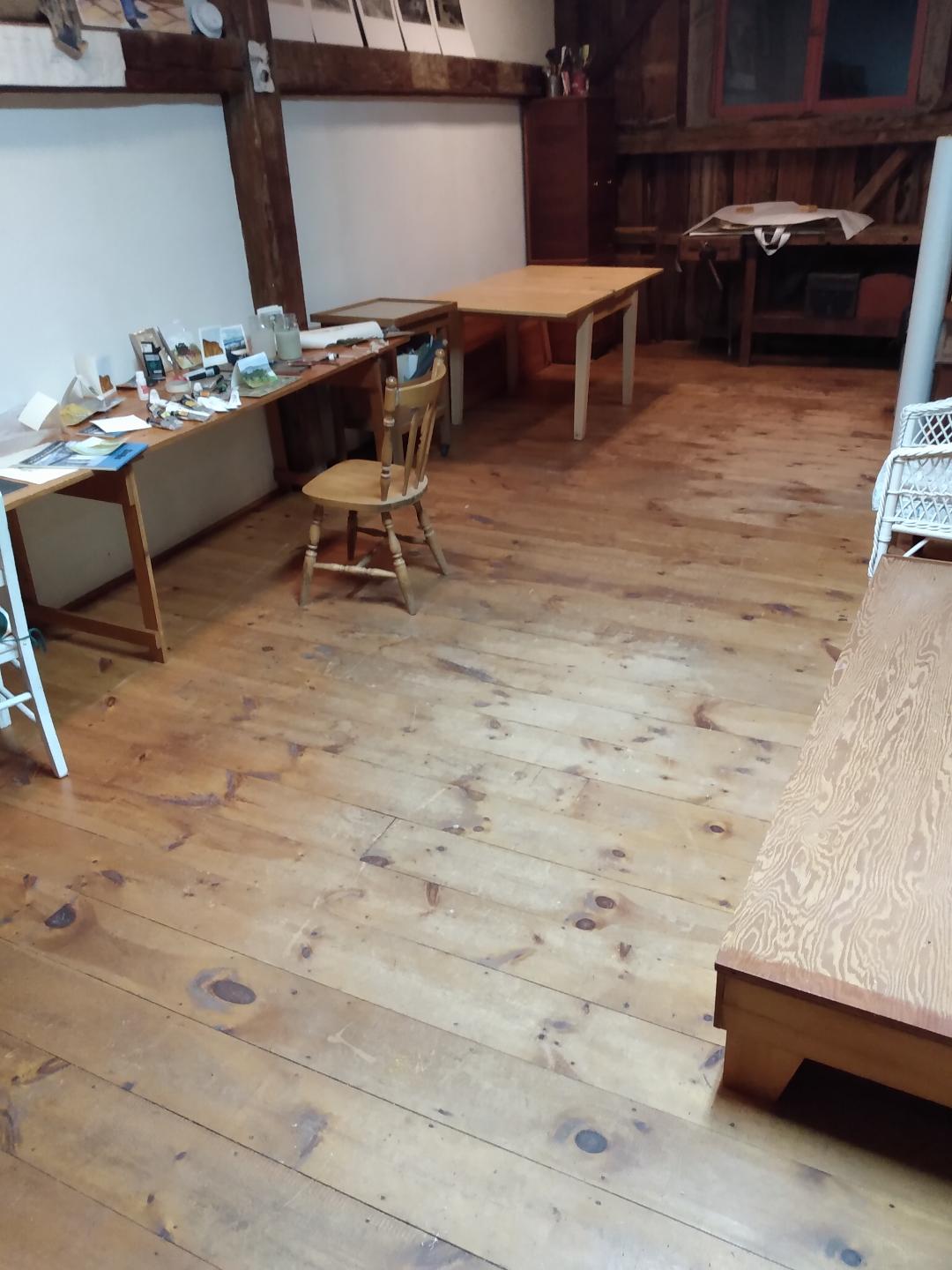 I packed some paints and paper for the trip, and I had a large room in an old barn with lots of windows as a temporary studio. (I took this photo the night before I left, so unfortunately it doesn’t show the effect of all those windows by daylight. But nice space, right?) It was chilly, but I’m used to “seasonal temperatures,” so to speak, when I paint. The obvious and inescapable subject for most of what I did while there was the spectacular beauty of the changing season. Fall always seems poignant to me, and what I’m moved by is not only the visual character of the season, but also the emotional impact of summer’s fecundity transforming brilliantly into the skeletal landscapes of winter. I’m not primarily a hyper-real figurative painter, and my efforts to capture the way autumn feels to me took on various degrees of abstraction. 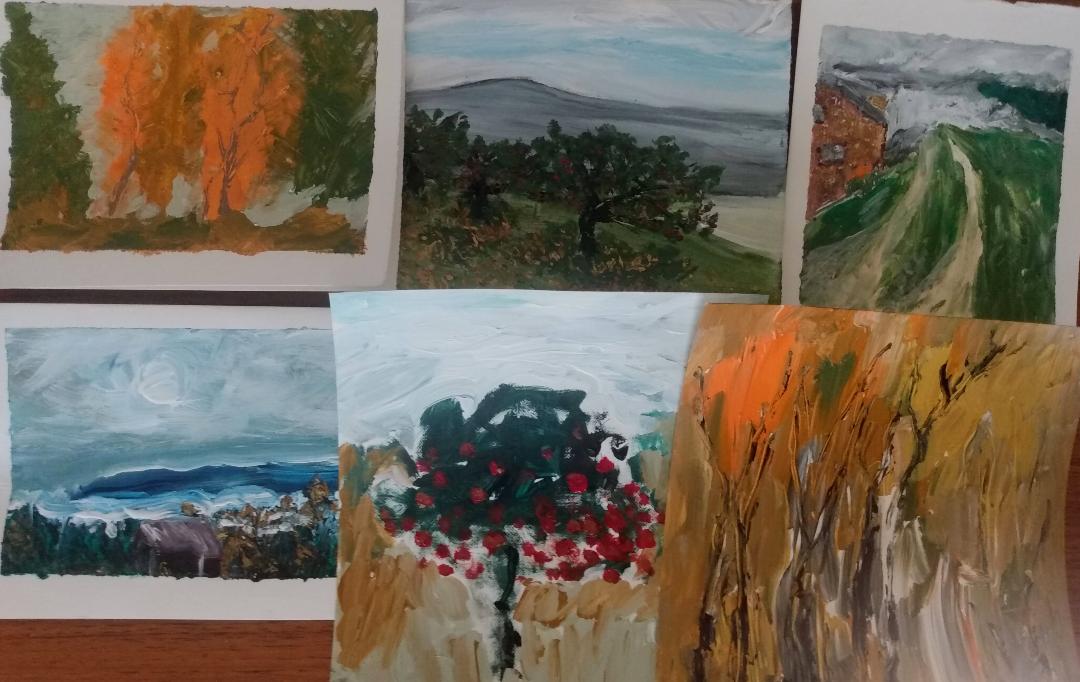 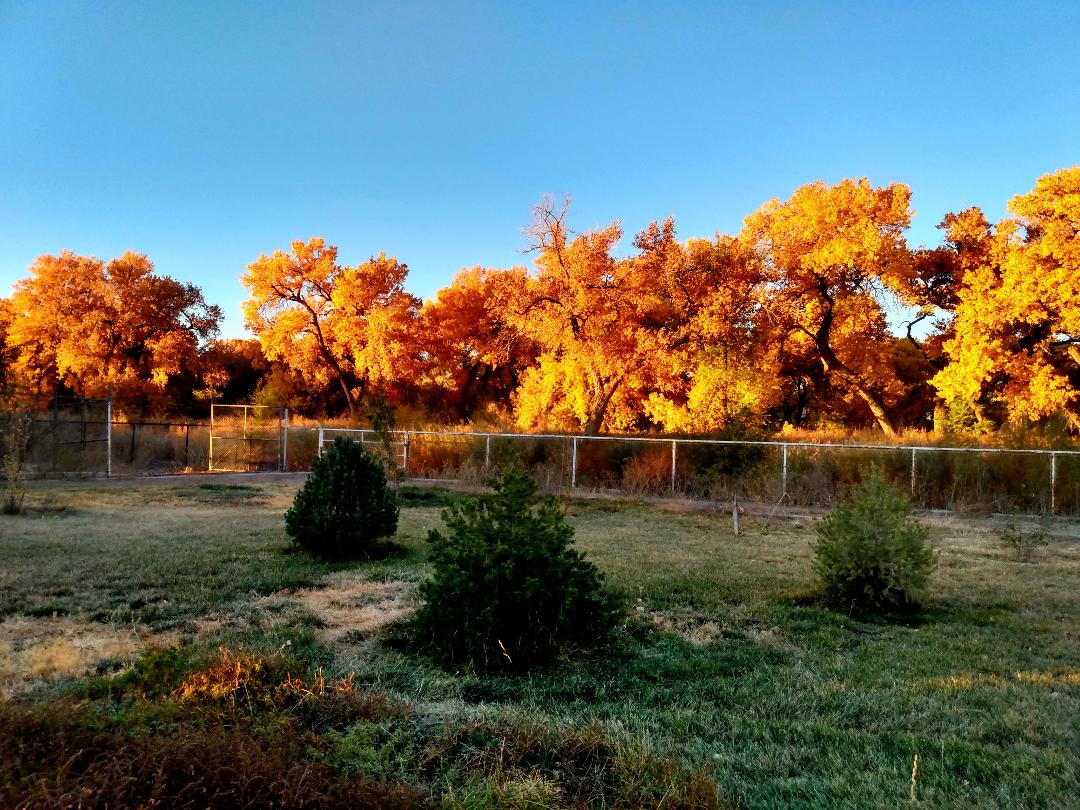 On my return to NM, my first view of the bosque outside the Art Garage was early in the morning. So, as you can see, this year I get to experience fall twice – and NM fall at its peak. The two experiences have their similarities and their differences. In New England, I felt surrounded by the season; on the banks of the Rio Grande, it’s something I can look at from the edge. And they SMELL different! I love it. 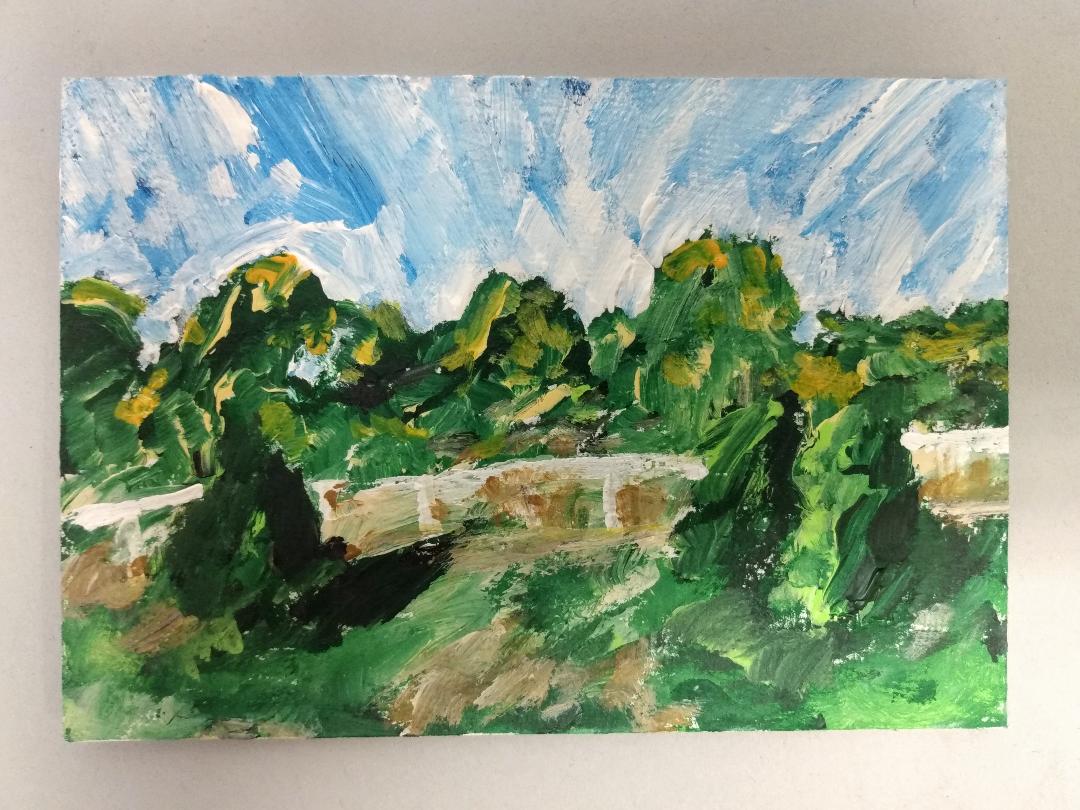 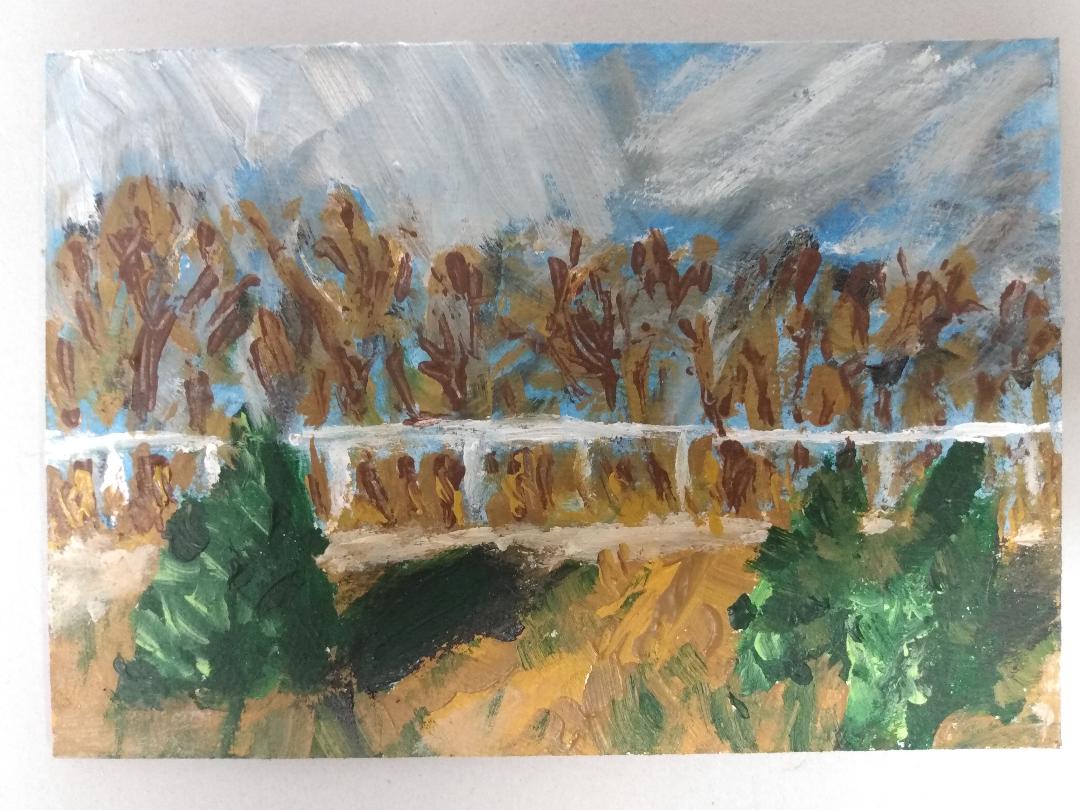 I love exploring ways of reflecting my sensory impressions of place and time through painting. These sketches of early and late fall kind of scratch a persistent itch – fall time is fleeting in ways more obvious than the rest of (fleeting) time. How to make it stop so I can stay with it? There’s no way. But I keep trying. 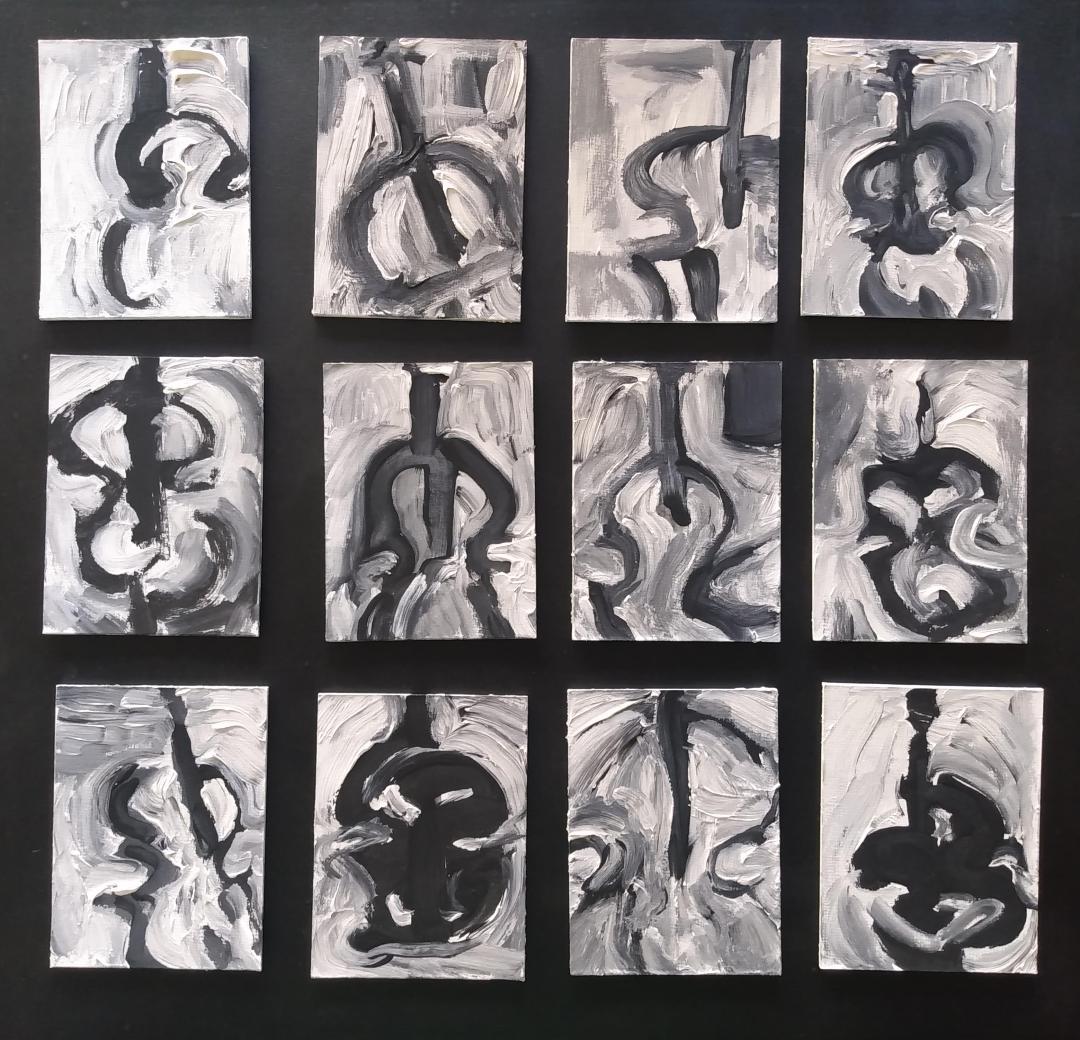 Sometimes it’s better not to think too much. Actually, most times it’s better. Thinking too much can be more of a brake than an accelerator. But not thinking can be a struggle. Part of what I love about painting is that, in certain cases, I’m able to stop thinking and analyzing and reviewing, and let the motion take over. One thing that helps with that is painting something that is so familiar that it nearly paints itself. That’s where abstract cellos come into my practice.

I have made a few kinds of abstract cellos. Some are detailed and colorful. Some are more linear, and often these are black and white. Some have people playing them, and some are alone, resting on a chair or floating in a void. Some are tiny, and some are quite large. Maybe I’m projecting, but when I look at the finished paintings, I see very different personalities in the cellos. It’s a bit like the way musicians feel about actual cellos. Seeing a cello section in an orchestra from a distance, their instruments and bows look basically the same. But every cellist sees their own instrument and bow as highly unique. Presumably, cellos provide me with a generic, familiar template that I can explore at will without over-focusing on process. But...that’s starting to sound a lot like THINKING.

So, when inspired, or sometimes just when I have no other pressing project, I paint cellos. And recently I’ve been painting multiple cellos, in groups. I call these “cello etudes,” playing with the idea of an etude, or “study,” in both music and painting – a type of work that, at its most basic, is a mechanical training tool, but in many instances lets the maker include some aesthetic or artistic element. Musical etudes are most commonly published in books of 12, sometimes 6, occasionally other quantities. Riffing on this tradition, I’ve assembled a few “suites” of etudes consisting of 12 unique cello paintings mounted together. (See “Six Trumpet Etudes” under the Custom Sized section of this website for another take on the concept.) At the moment, I have a few such sets under construction. 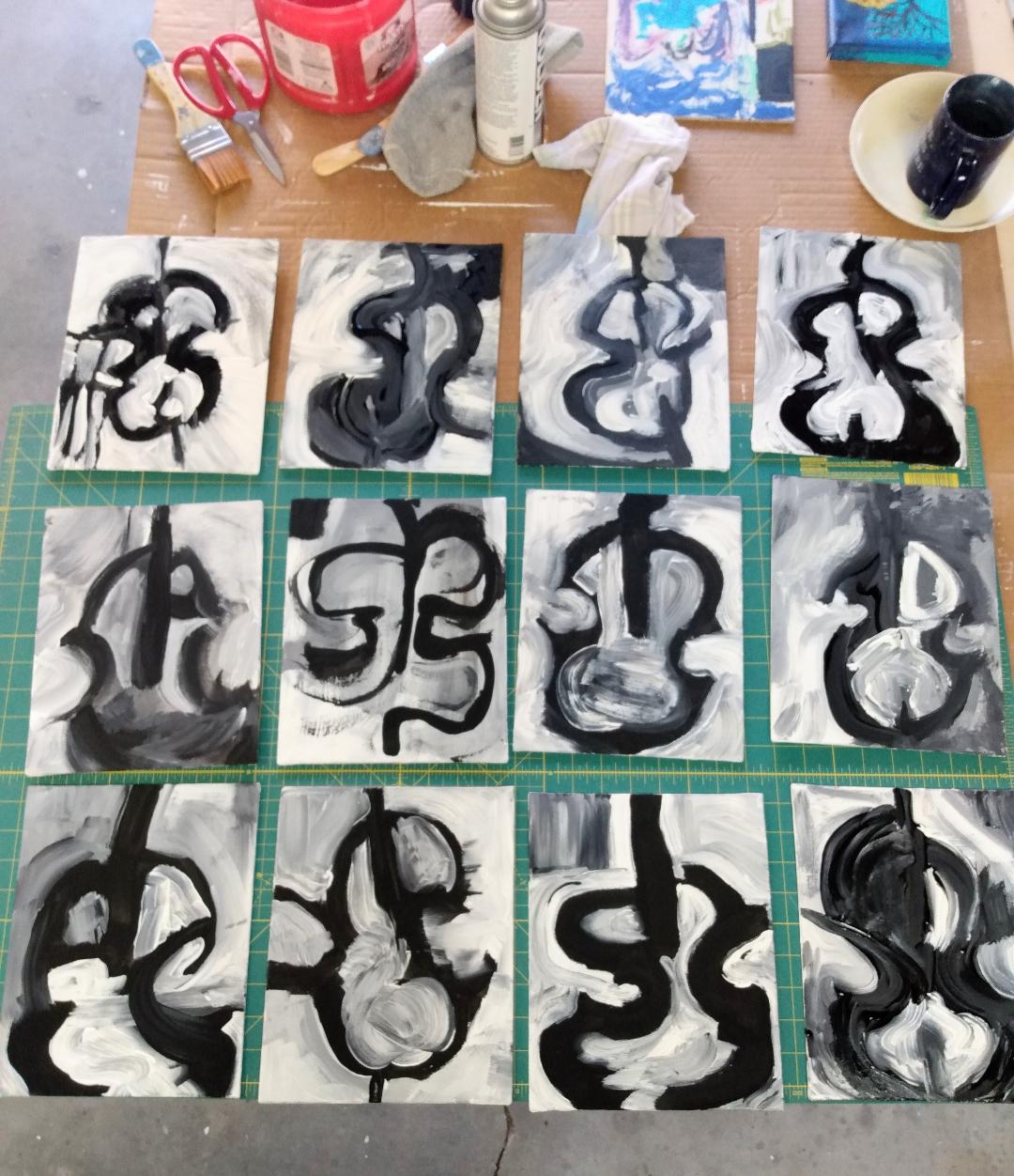 At the top you can see an almost-finished layout of 12 Cello Etudes consisting of 3x4 paintings on artist’s board. Just above you can see an assemblage of larger 8x10 paintings on canvas board that I’m just starting to arrange for eventual mounting. When these (and a couple more that are in progress) are finished, I’ll post them, either in the Custom Sized section, or possibly in a new section devoted to etudes. We’ll see.

* One set of Cello Etudes is now complete. You can see it mounted and framed under “Custom Sized” in the painting section. 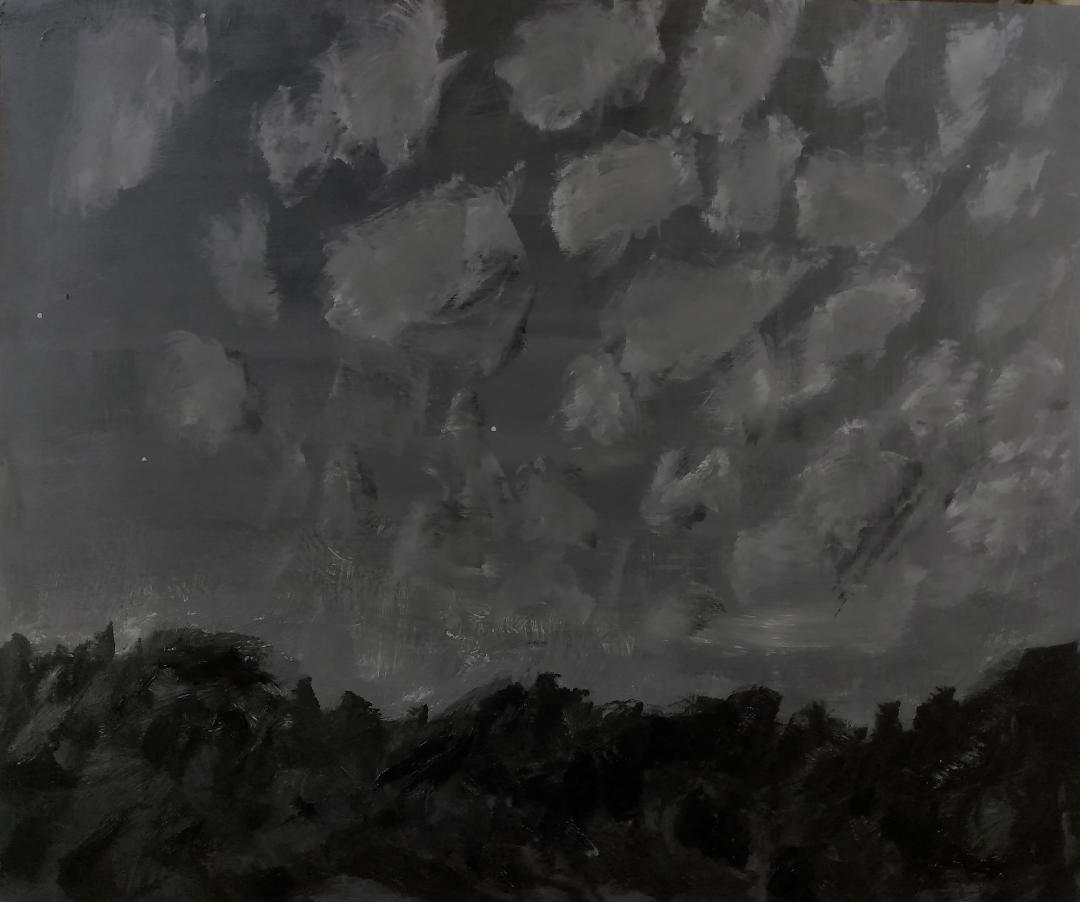 The view from the Art Garage is a peaceful, lovely part of my painting environment all day and all year. The building is not climate controlled, and usually I raise the large overhead door when I’m in there – it’s going to be hot, or cold, or whatever the weather dictates, regardless. For me, the view over a field, across a fence and an irrigation ditch, to the dense wall of trees at the edge of the bosque is grounding, even when it’s not, technically, much of a view at all, i.e. when it’s dark out. Late one night I took a break to stretch my limbs, and walking outside through the wide door, I was struck by the way the sky was patterned by a field of clouds that were illuminated around their edges, with a few stars and planets mixed in. The vibrant colors of daytime had condensed into black and gray shapes. Even in the near-absence of light, the bosque has many appearances, and I stopped what I had been doing to get this impression. It’s fairly large, which allowed for a kinetic approach to recording the mood and appearance. I’m planning a simple black frame for this one, possibly with shadow edges. I’ll put an image of it in the “Custom Sized” section of the website when I get it done.